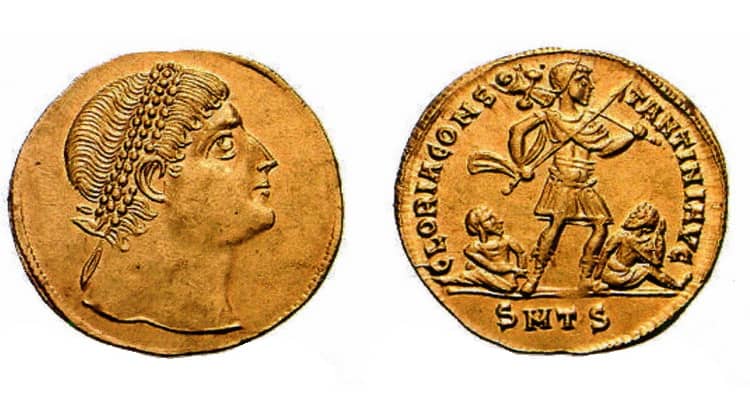 The solidus of Byzantine Empire – a coin of pure gold, introduced into wide circulation in 324. Initially, the solidus was issued by the Roman Empire for its western lands, and then spread to the eastern lands, as it was characterized by a high fineness. The Byzantine citizens used imperial solidus until 1092, when Alexios I abolished the coin, introducing the national hyperpyron instead, which later became known as the besant. All Byzantine Empire gold coins in our catalog. The Byzantine solidus was imitated by the mints of neighboring countries – in particular, it influenced Arabian dinar, and also inspired the Sasanid Empire to mint gold coins of the highest fineness.

Early Byzantine coins followed the late Roman fashion in design. The head of the emperor on the obverse should be engraved in full face, not in profile. As a rule, there was a Christian symbol, such as a cross or an angel on the reverse. The gold coins of Justinian II abandoned these stable conventions, presenting a pectoral image of Christ on the obverse, and a partial or full portrait of the emperor on the reverse. By the way, these innovations led the Islamic Caliph Abd al-Malik, who had previously copied Byzantine styles, replacing Christian symbols with Islamic equivalents, finally developed his own distinctive Islamic style, according to which only the inscriptions were engraved on both sides of the coins. This style is used on all coins of Islamic countries right up to the present years.

During iconoclasm, the Byzantine style of coinage of Justinian II was banned. After the end of religious confrontation, it remained standard with minor variations until almost the end of the empire. In the 10th century, instead of images of emperors, coins were minted with the so-called “anonymous follis”. Today, because of the absence of the rulers’ portraits, it is very difficult to evaluate the exact year of coinage of this type of coins. On the obverse of the anonymous follis usually there is a shoulder-length image of Jesus Christ, with the inscription “XRISTUS / bASILEU / bASILE”, which means “Christ, emperor of emperors”.

Approximately in 12th(XII-XII) century there was a special tendency in Mediterranean coining. They tried to make coins larger in diameter and as thin as possible. Byzantine solidus did not lag behind fashion, so that their later copies turned out so thin that they could be rolled into a tube with fingers. The design of the obverse and reverse was not changed; the skill of the craftsmen remained high. This was one of the reasons for the high prestige of the Byzantine coins in the region, which remained quite high until the very end of the empire. After the fall of the state, the Byzantine style continued to live – European rulers, who started to issue their own coins, adhered to the simplified stylistics of Byzantine patterns, by placing portraits of kingson the obverse.

All 491 – 518 Anastasius 1 Byzantine Empire gold coins in our catalog.

Solidus of Justinian II (after 705)

The coin was minted in the midst of confrontation with the iconoclasts, which is why its design differs from the classical one. There are portraits of the empress both on the obverse and reverse of the coin that was minted between 797 and 802.

Solidus was introduced by Diocletian in 301 AD as a replacement for aureus. Initially, the coin was minted in a relatively small circulation, but under Constantine I in 312 it met a wider circulation, and the production of aureus was completely abolished. From the time of Constantine until the 10th century, every solidus weighed 24 Greco-Roman carats (about 4.5 grams of pure gold), the diameter was also constantly unchanged. By the time of Constantine’s death, the solidus already cost 275,000 permanently depreciating denarius and had spread to the entire Western Roman Empire. By 324, Byzantium also used solidus and began its own minting of these coins. Today, solidus is considered one of the affardable Byzantine gold coins comparing to older aureus, drachmas and staters.

In 1034, Michael IV the Paphlagonian accessed the Byzantine throne, starting a slow process of drawing solidus out of the country’s monetary circulation. All 1034-1041 Michael 4 Byzantine Empire gold coins in our catalog. At first, the purity of the coin worsened not so fast, but gradually gained momentum. If under Constantine IX coin was about 21 carats (87.5% purity), then during the reign of Constantine X it was already 18 carats (75%). Further: 16 carats (66.7%) during the reign of Roman IV (1068-1071), 14 carats (58%) under Michael (1071-1078), 8 carats (33%) under Nikephoros III (1078-1081) and from 0 to 8 carats during the first eleven years of the reign of Alexios I (1081-1118). Alexios reformed coinage in 1092 and completely eliminated the solidus (histamenon nomisma). Instead, he introduced a new gold coin called “hyperpyron nomisma” worth about 20.5 carats (85% pure gold). The weight, size and purity of hyperpyron remained stable until the fall of Constantinople in 1204.

During the 6th and 7th centuries, “light” Byzantine solidus, equal in price to 20, 22 or 23 siliquas (one siliqua equaled 1/24 of the standard solidus) were issued along with the usual solidus, presumably for commercial purposes or paying tribute. Many of these light coins were found in Europe, as well as in Russia and Georgia. Light solidus had special marks indicating a lower price of the coin.

In the Greek-speaking world of the Roman period, and then in the Byzantine economy, the solidus was known as “νόμισμα” (nomisma, plural – nomismata). In the 10th century, the emperor Nikephoros II Phocas (963-969) introduced a new light gold coin called “tetarteron nomisma”. All 963-969 Nicephorus 2 Byzantine Empire gold coins in our catalog. It was supposed to be in circulation with solidus, and from that time the solidus (nomisma) became known in the Greek-speaking world as “ἱστάμενοννόμισμα»” (histamenon nomisma). It was initially difficult to distinguish these two coins, since they had the same design, size and purity of gold and did not have any indications of denomination.

The difference was only in weight. “Tetarteron nomisma” weighed about 4.05 grams, while “histamenon nomisma” kept the traditional weight at 4.5 grams. To eliminate the confusion that arose around the coins, since the reign of Basil II (975-1025) the solid (histamenon nomisma) began to be minted with a larger diameter, but thinner in thickness, and with the same weight and purity as before. All 976-1025 Basil 2 Byzantine Empire gold coins in our catalog. From the middle of the 9th century the Byzantine solidus was often made curved from the reverse side. A large inscription “histamenon nomisma” was placed on the curved part of the coin to distinguish the solid from its “younger brother”. At the moment, both coins have roughly the same value on the numismatic market- from 300 to 1,000 euros.

From the 4th to11th centuries, solidus, as well as other ancient gold and silver coins of Ancient Greece, was minted mainly at the Constantinople Mint, as well as in Thessaloniki, Syracuse, Alexandria, Antioch, Carthage and other cities. During the 8th and 9th centuries, the Syracuse Mint produced a large number of solidi that did not match the specifications of coins made by the Imperial Mint in Constantinople. Syracuse solidi were, as a rule, lighter (about 3.8 g), and their purity was only 19 carats (79%). 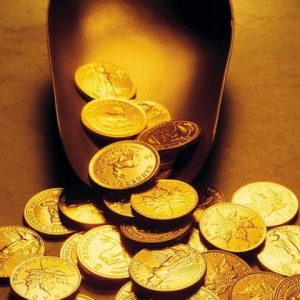 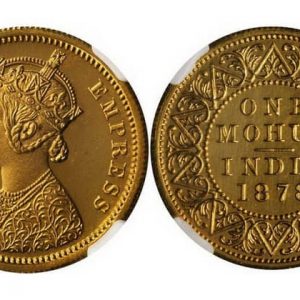 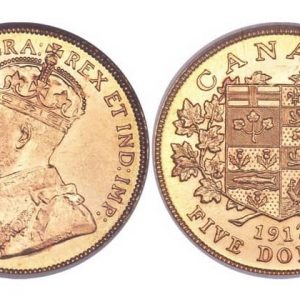